see that picture above?
hm..., you were probaly wondering that why of all things that this stupid blogger could have wrote about and he wrote about a black dot...

That's what they all say...,
but first question..
is it just the black dot that you notice only?
is it?
are you sure?
if it is.., then i bet that it is the same way how you see other people as well like how you see this black dot..rite?
hmm..., again some of you might now wonder if this blogger here is crazy..

eat your words, yo..
once again, look carefully on that image i post above..
see the black dot again?
well, think carefully...is that what only you could see?

actually.., you should have notice by now that in that picture...,
you could not only see the black dot but also could see the white background of the image surrounding the black dot.., rite?

hmm... if you can see it, then i shall further explain..
in a black dot.., the black dot represents people's bad side or weakness..
It is what we always see in other people..
For example, a boss always see his employee as a money face but he doesn't notice that the employee is also a very hardworking person at the same time.
Another example, a wife always nag her husband for always being a bit lazy(he comes home early from work) but she doesn't see that he actually cares for their children
and comes home early because of them.
Here is another example, a parents always see their son who is lazy and play computer games often but what they didn't see was that he is very focus in his in whatever he does and like.

hmm..., the white background are representing a person's good side or advantage.
i think you might have understand it by now.

So, don't only see a person's black spot(bad side) and focus on it.
because if you do so, you won't be able to see and notice his or her white background(good side).

Sadly to say, many people only acknowledge a person's black spot.
Although nobody is perfect, but what we can do is to improve and be better than our oldself..

next post is something to do with this post...(coming soon)
c ya.
Posted by Chris at 12:06 AM No comments: 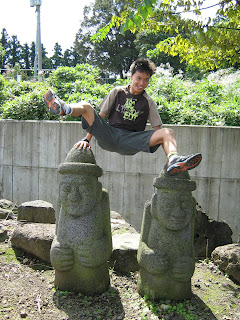 yo, u see this picture?
Well, it was taken in Korea, Jeju island. Its a nice place.
trust me...
the people there are nice, and the place there is clean.(cleaner than here duh)
you won't be seeing motorcycle coming from here and there because there rarely any motorcycle there..
most of them take public transport..=)
if we can be more like them, i think our country name can be raise..although tats nt gonna happen. 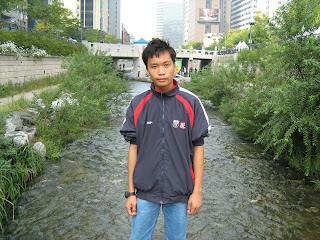 saw the photo that i took that has a river in the background?
that is like their river underground bt look at it..
its clean and cold, you could even see your reflection on it.
i did't hav much time 2 update my blog. so there would b delay..hahax
Posted by Chris at 8:56 AM No comments:

hmm.., i advise you people to read this only during nite...

There is once a in a st.john ambulance..,
there is this..., a dummy..., a dummy tat has been used 4 showing the children
the consequences of not following the trafic light..it has a face of a little girl..

There is one day..., not one fine day..
when during the event of promoting about the following the rules of the trafic light where they showed the same thing again like they always do.
They put the dummy in a standing position in the middle of the road as usual and let a car to bang it down to show the school children the effect of not following the trafic light.
But this time things are different, different in a weird kind of way..
When the dummy was hit by the car, it fell on d road about three metres away like it always did..
Suddenly..., blood came out of the dummy.. from its eyes, nose, head, and some part of it..
One of the st.john member was ask to check it out.
When the st.john member, goes near the dummy, she was shock of what he had seen and the dummy spoke to her that she(the dummy) feels pain and ask the st.john for help.. N blood and tears came down from the dummy's eyes.. The st.john members that were jz to frighten tat they one of them burn it and threw it away.. It was one heck of a day, that does st.john remember tat event..

Well, they think that its over..., bt things are jz getting started..

During the holidays.., the st.john organise a camp in the genting resort..
well, in each two people shared one room..
and in each room there is one st.john box(the one where they hav their equipments) wit a red cross symbol on the box in their toilets..
hmm..., on the first day of their nite.. sumthing strange happen..
In one of the st.john's hotel room..., one of the member went to the toilet in the middle of d nite..
He jz wash his hands after doin his buisness.., bt his hands bleed out a bit for no reasons.
He then reach for the st.john box, and gt his small wound patch. He closed the box. Bt what he did't noe is tat sumthing had already came out of the box behind him.. It could be seen holding a knife frm the reflection of the mirror and he saw it.. He was jz terrified, and wanted to shout for help but he was stab by it a about like 50times and he now recalled the face of it, it was the face of the dummy tat had been burn n thrown away.. but he died after that. The same goes to his partner.. this was repeated to many rooms in tat nite..
Many st.john were killed.., and "it" wants its revenge..for the one that had burn it..
after all of them had been killed.. it doesn't seems to be able to find the one it has been searchin for.

Two days after that, the st.john who had burn it was at home "alone". well, coz "it" is nw there wit him..
He went to the toilet, and the same thing happen again. but he did't died.
He ran for his life.The dummy smile wit a wicked face. As he ran out of the house, suddenly there came a car and knocked him down and he was bleeding..
He was dying.. then came the dummy to him, he ask "it" for help. But "it" burn him like what he had did to "it'..
Revenge its done..

Well, there is still one part of the story that you don wan to miss out..

"it" nw hunts down for the blogger who wrote about it cause the blogger noes the what had happen to those st.john... N "it" doesn't wants many people to noe about this too..
So, readers.. please be carefull in the middle of the nite.., espeacially when you wan to go 2 d toilet at nite urself..

ppl that I link to: